"if you're going through hell, keep going …" -winston churchill

I could tell I was sick yesterday when I got a craving for Grill-A-Dogs.  Comfort food calls when the sinus cold hits.  Luckily, my illness coincided with the first day of school, so I was able to rest in a quiet house.  And I didn’t have to share my Grill-A-Dogs with anyone.

So what’s a Grill-A-Dog, you’re wondering?  It’s sort of a cross between a grilled cheese and a pogo.  (Or what I imagine a pogo to be, never having eaten one.)  To make them, you need two wieners, two pieces of bread, butter, and a Grill-A-Dog maker.  It’s similar to a sandwich maker, but instead it molds toasted bread around hot dogs.

Close up of the Grill-A-Dog maker 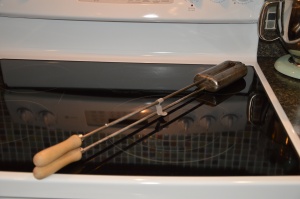 Tastes just as good as on the campfire …

You can dip them in ketchup and mustard.  Mmmm…

When I was a kid, we used to eat Grill-A-Dogs at lunch time at the cottage.  My cousins, sister and I feasted on them all summer long, as often as our mothers would make them for us.  You can only make two at a time, and subsequent rounds of Grill-A-Dogs pose a bit of a burn threat to the chef.  It’s not as easy to load the bread and wieners when the thing is burning hot.  But our moms had mastered the art of gingerly placing the ingredients and clamping the griller shut.

They were motivated — the moms wanted their own Grill-A-Dogs, too.  This comfort food has a long and revered history in my family:  My mom’s family used to camp a lot when she was a kid and they were devoted Girl Guides and Boy Scouts.  Even my grandparents were involved in Guiding and Scouting from an early age and became leaders as adults.  So, when a local company started selling these Grill-A-Dog makers, it was a great addition to the camp kit.

Eventually, the family Grill-A-Dog maker ended up at the cottage.  Now, for a whole generation of cousins, it is eternally associated with summer, family togetherness, and eating lunch on the dock in a wet bathing suit as fast as you can so you can go swimming again.

When I moved away and started missing summers at the cottage, I realized that at least one element of that summer fun was portable … I started plotting how I could remove the Grill-A-Dog maker from the premises without anyone noticing.  But really, how could I deprive them?  The Internet saved me from becoming a thief, because I discovered that the inventors of the Grill-A-Dog maker are still in business and with several models to choose from!  If this post has inspired you or piqued your curiosity, you can even get your own Grill-A-Dog maker.

Soon the coveted Grill-A-Dog maker arrived at our house and I started making them for my own kids.  Of course, they loved them!  The eldest was convinced I was calling them Gorilla Dogs.  And she still is.  I like it — the 4th generation of Grill-A-Dog lovers is adding to the legacy.